Skeletrox is the (former) secondary antagonist and the boss of Chapter 4 in Book 6 of Bookworm Adventures Vol. 2. He is the younger brother of Bigger Brother and the robot counterpart of Codex.

He is one of the robots used by his brother, Bigger Brother, in accomplishing The Plan. As he appeared he fought Lex, but he was defeated. In his second battle against him, he fought in a dance battle, but he was shut down and beaten for good. His systems then rebooted and from then on, he joined Lex to defeat Bigger Brother. 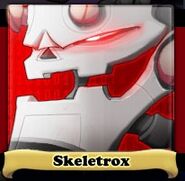 Skeletrox before he was reprogrammed 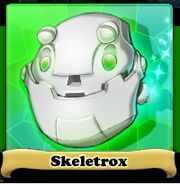 Skeletrox after he was reprogrammed

Skeletrox as a Companion
Add a photo to this gallery
Retrieved from "https://bookwormadventures.fandom.com/wiki/Skeletrox?oldid=6129"
Community content is available under CC-BY-SA unless otherwise noted.