Start a Wiki
The Queen of Hearts is the boss of Chapter 10 and the last boss of book 4 in Bookworm Adventures Vol. 2.

She is the one who knows what is happening in the Great Library due to the uncontrolled damage to the Rifts. As they go through a long journey to find the Queen, they finally go onto her castle but she was angry so she thought that there were intruders inside the castle, but in the end, she was defeated. After the battle, she said that some characters were left out of their books due to the uncontrolled Rifts. 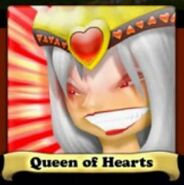 The Queen of Hearts angry 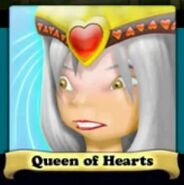 Retrieved from "https://bookwormadventures.fandom.com/wiki/The_Queen_of_Hearts?oldid=6268"
Community content is available under CC-BY-SA unless otherwise noted.